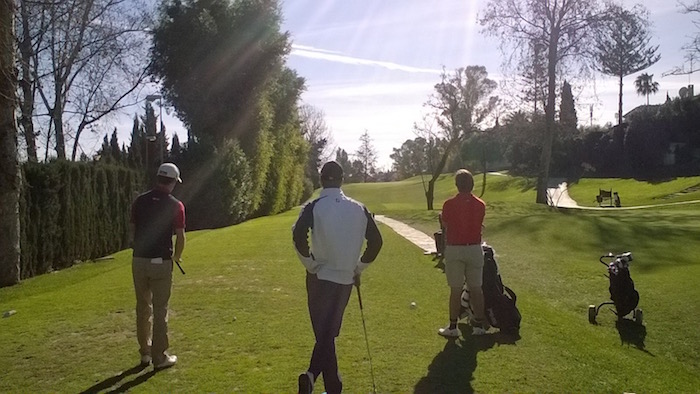 The Real Club de Golf Guadalmina – San Pedro de Alcantara,  Marbella- has hosted the days between 9 and 12 January the Andalusia Men Cup competition which, together with the women’s event, to be held at Villa Padierna He has  opened the competition calendar of the Royal Andalusian Golf Federation this year 2016. The tournament – scoring for the R & A World Amateur Golf Ranking and Boyle National Ranking brought together the leading amateur golfers Spanish level.
UGPM team has been represented in the men: Victor Pastor, Alberto Ascari and Andrea Gobbato; and in the female category Pilar Martinez. Since UGPM we want to congratulate them who have already carried out an extraordinary role throughout the entire tournament. Victor and Andrea after being ranked in the top 50 during the first three days, played the final round. You have done a great role and we are very proud of your work.

Congratulate the winner of the men’s Ivan Cantero, having signed today the better lap of the whole week. Card with a brilliant 66 hits, with seven birdies and one bogey and a cumulative total of 276 (-12), outdone all eight shots federated Seville to Real Club de Golf de Sevilla, Pablo Heredia, who from the first day has remained among the top positions, and in this last round has signed a pair of field.

In the women congratulate Maria Parra who has been proclaimed as the winner. Maria has managed to retain the title of the 2015 field season at Villa Padierna Golf Club (Marbella, Málaga). Maria Parra has imposed with 229 shots total +10, after delivering cards 76, 77 and 76 impacts.